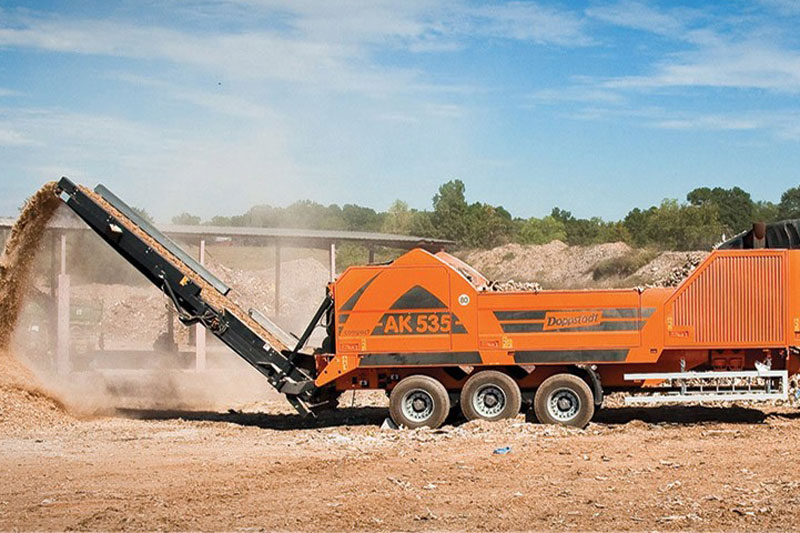 Randy Kreider grew up in Lancaster, a quaint small town in rural eastern Pennsylvania. Unless you’re inside the urban boundaries of Philadelphia, most of this half of the state is economically driven by agriculture and other natural products. As the owner of Kreider Mulch, Randy has been able to capitalize on those opportunities, turning this once-small bark mulch lot into a successful business that produces more than 150,000 yards annually. He recently built a robust topsoil operation to complement the mulch products.

Stumbling Upon an Unexpected Opportunity

“My father and I purchased this business from the previous owner back in 1999,” shares Randy. “It was a small bark mulch operation run by just he and his wife.”

Randy admits that he certainly wasn’t looking to get into the mulch business, and it was not a career path he had ever even considered.

“We came at this pretty new!” he continues. “I started in a tobacco stripping room; we used to raise a lot of tobacco, but that industry obviously got pretty hard. He [the previous owner] used to come down and hang out there and he was ready to retire and was interested in selling his business so we ended up buying it from him.”

Randy and his father spent their first few years in business just trying to wrap their heads around what was required to keep the operation running. With no prior experience, every challenge was a new one that required overcoming the typical learning curve. But when it came time to make changes, they made smart decisions that have had solid long-term benefits.

“About 10 years ago, we started taking tipping fees for green waste. That was a significant change because it dramatically increased the amount of material we had for mulching while adding revenue,” Randy explains. “It allowed us to move beyond just making a bark mulch.”

Other smart additions to their product and service line followed.

“We added a topsoil operation, which provided a complementary second product we could sell alongside the mulch. We began a coloring operation so we could sell dyed mulches, which are now in high demand. We’ve looked to grow our business through sustainable decisions that would justify the investments we would have to make to support them.”

Nearly ten years ago, Randy began to evaluate the operational costs of their equipment in an effort to further increase the efficiency of the business. All of their brush and green waste grinding had been performed in tub grinders—and while effective at reduction, they were not the most efficient pieces of equipment.

“You have to do your homework,” he advises. “I can’t give you exact figures, but I work directly in the yard all spring, and I see firsthand how much time we spend changing tips, our fuel consumption, the throughput. We wanted to find a better option.”

In 2009, Kreider Mulch purchased an AK 630 horizontal high-speed grinder, their first of what would become four pieces of Doppstadt Equipment. He states numerous reasons for the decision, but Randy most appreciated the free-swinging hammermill design of the AK.

Reducing Failures with a Swinging Hammermill

“The fuel efficiency is certainly a difference maker,” says Randy. “It uses much less fuel than our tub grinder. But the swinging mill has to be the biggest advantage. If you get any contamination or metal in it, it doesn’t self destruct. The solid mill can get really jammed up and take you down for a day easily. And comparatively, the wear time on the swinging hammermill tips is much longer than the fixed mill, so we’re changing tips much less frequently.”

Randy liked the Doppstadt high-speed grinder so much, the company acquired a second AK unit to provide extra capacity and flexibility when mulch production peaks. And he did not stop there.

“About three years ago, I went over to Germany to tour the Doppstadt plant with a few members of the Ecoverse team,” he explains. “We got to see the new SM 720SA trommel, and I was able to acquire the very first unit they produced of that machine. We actually have model number one.”

Again, Randy quickly recognized the fuel efficiency benefit of Doppstadt trommel screens, but it was the easy-change drum feature that delivered the biggest return on his investment.

“When we got the Doppstadt SM trommel, we also got two drums—one for sizing and the other a solid drum for our dye runs. Two guys can swap out those drums in 15 minutes, where before on our previous trommel, we would have to stop and wrap the drum in plastic to color, and that would take more than an hour. After a color run, it would be another two hours of time to remove that plastic and clean everything up. The time savings has been dramatic.”

Kreider Mulch completed their Doppstadt trifecta last year with the acquisition of a Doppstadt DW 3060 slow-speed shredder. After outsourcing the grinding of larger logs and brush, Randy rented the DW a few times to bring that process in house. Over the winter, he closed the deal to own the machine outright.

“Now that we have the slow speed in our yard full time, we run everything through it that comes in, regardless of size,” describes Randy. “Before anything goes into a grinder, it first passes through the shredder. It makes sense on so many levels and allows us to be more efficient and responsive when grinding. In the end, it just results in a higher quality product overall.”

With stable full of Doppstadt equipment, Kreider Mulch is well-positioned to meet the demand soil and mulch demand of the area and can look for new future opportunities as well. There are no current plans to expand into new materials and operations, but Randy certainly does not rule anything out.

“We see the value of composting and that is something we may one day consider. We understand that food waste handling is becoming a huge opportunity, and again, that may also be something we eventually take on. But for now, our goal is to keep being the best at what we currently do and continue building trust with our growing base of customers.”