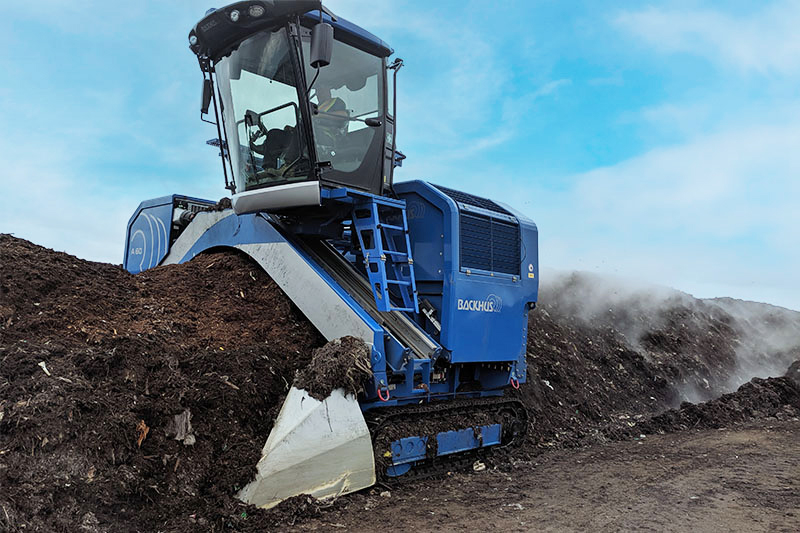 EVINGTON, Virgina | Ken Newman began his journey as co-founder of Royal Oak Farm in England, his birthplace, and where he obtained a horticulture degree from City and Guilds of London Institute. After moving to the United States in 1985, he would work as a truck driver and a manager of gardening stores as well as a landscaping service.

Eventually, he settled in Evington, Virginia, where he, his wife Barbara, and her mother Doris Mueller purchased Royal Oak Farm, which has become a dynamic organics recycling facility in the region.

The journey wasn’t easy. Like most businesses, they struggled after the Great Recession and almost had to shut down.

“We maybe should have given up, but because it was a family business we fought for it,” said Newman.

The family’s persistence paid off. Today, Royal Oak Farm is one of the largest solid waste and composting facilities in the state, offering services for organic recycling, composting, trucking, and site development. Their high-quality compost carries the exclusive Seal of Testing Assurance (STA) designation given by the U.S. Composting Council to facilities that produce product under the strictest of guidelines.

For Royal Oak Farm to handle the daily volumes of inbound material and produce their quality end products, the entire operation needs to run at peak efficiency. Being such a large facility, they typically operate their equipment at least 8 hours a day, 5 days a week, depending on the weather, said Newman.

Long working hours and high volumes of material to process call for the most reliable pieces of equipment. For Royal Oak Farm, it’s always been a priority to invest in quality.

In 2005, they purchased a Backhus 16.55 windrow turner. Aside from the power and throughput capacity of the machine, one of the key factors was the dual cabin seats, which was a feature that the other units didn’t have.

“We could put an operator and a trainee in there and both of them can ride the windrows while the trainer teaches the trainee what to do,” said Newman.

So it’s no surprise that as the facility grew, and when a new turner was needed, Royal Oak Farm turned once again, to the Backhus turner from Ecoverse. In 2020, they purchased an A60, one of the largest turners available in the market.

Between the reliability and the fuel efficiency, he knew he could depend on the Backhus machines to put in the hours of work required to turn their 52 windrows of compost.

“It’s the longevity,” said Newman. “They run a lot longer before they need rebuilding, and their fuel efficiency is good.”

For a facility like Royal Oak Farm, there is always a lot of finished material needing screened. For this step in the process, Royal Oak Farm has relied on a Doppstadt SM 720 trommel for 15 years. A big feature they like on the Doppstadt trommel is the quick-changing drum.

“My operator can have the screen replaced in 15 minutes,” said Newman.

And with space at a premium at most facilities, the compact footprint of the Doppstadt trommels relative to others in the market has been much appreciated. “They’re half the size of the comparable brands,” added Newman.

So as the business has grown, Newman felt it just made sense to stick with Doppstadt trommels. In 2021, they purchased Doppstadt’s largest and highest production screen, the SM 726 SA Plus.

Though, this didn’t mean the older SM 720 was retiring. In fact, it’s still going strong.

“We’ve had very, very few problems with the Doppstadt that is 15 years old,” said Newman.

But as any operator will tell you, downtime happens with every piece of machinery. So, how does Newman explain the longevity of his equipment? The support from Ecoverse has been the distinguishing factor.

“It doesn’t matter what kind of machine you’ve got if you haven’t got the parts and can’t service the machine,” Newman said. “That’s the reason we chose Ecoverse.”

For more information about Royal Oak Farm, please reach out to them at 540-297-3299 or visit their website at royaloakfarmllc.com.