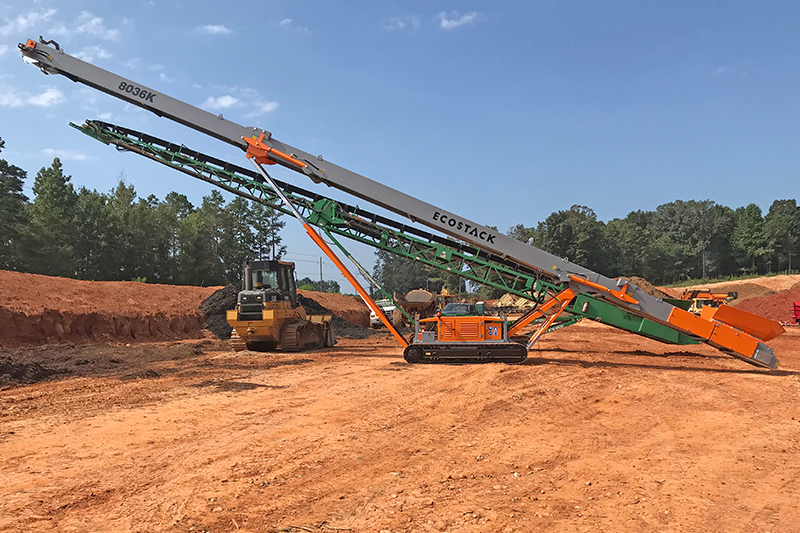 Start-Up Metrosite Builds Recycling Leader in Less than One Year

Scott Ledford took the back roads into the organics recycling industry—literally. As the owner of a communications tower construction company, he spends considerable time doing work in rural Georgia communities. And during his more than 20 years in that business, he could not help but notice how recycling is far less prevalent than it is in the metropolitan areas. Last year, he decided to finally do something about it, and in less than 10 months has built a tremendously impressive operation from scratch.

“The areas may not be as dense, but that does not mean that the same waste materials aren’t being generated,” Scott explains. “Rural areas have a lot of small factories and small businesses that generate a lot of waste on a per-job basis, perhaps even more so than their urban counterparts.”

He acquired a 20-acre yard and founded Metrosite as a roll-off container business because you need to gather material before you can recycle. Eight months into that effort his operation has 72 cans distributed throughout the area, two collection trucks and a third on order. As material is brought in, it gets separated and processed for relevant repurposing.

“We’re in the process of permitting a full recycling center to concentrate on mixed C&D as well as MSW,” continues Scott. “But we’ve been processing inert materials for awhile now. Yard waste, green waste, land clearing debris, pallets, dunnage from lumber yards and such.”

Metrosite grinds the wood and organics into various mulch products, producing both natural and colored options. Waste concrete and asphalt are also processed to make sub base material for construction site entrances. His yard is just beginning to produce and offer mixed topsoil, and Scott hopes to start composting before the end of the year.

Running a successful material recycling business requires good, effective equipment of course. And Scott is the first to admit he knew little about grinding and screening when he started. But he’s very intuitive, and does nothing without thorough research and a solid plan. Metrosite may only be eight months in operation, but the effort started several years ago. One of the first points of contact he made was with Ecoverse.

“Two years ago I was looking at an idea to reclaim material from inert landfills to reprocess into fuel, and I met Hugh [Fagan] and Doug [Merritt] at Ecoverse while researching equipment,” Scott recalls. “I can’t emphasize enough how critical their support has been over these years to help me get into business. Doug has extensive experience in mulch production, and they have both been endlessly forthcoming in advice and direction.”

When it came time to invest in equipment, Ecoverse was one of the first calls he made.

“Our trommel screen is central to almost all the material we produce, so we needed something that was versatile, durable and able to produce at high volume. Getting a Doppstadt was definitely the right decision.”

Their Doppstadt SM 617 is equipped with magnetic head pulleys on both discharge conveyors to ensure that fines and overs are free of metal contaminants. Both streams are repurposed into value-added product, and only the highest quality material will do.

“The material that comes in our roll off containers is dirty, but with the way we’re set up it’s not a problem,” continues Scott. “This is what we talked extensively to Ecoverse about. Everything that gets screened is exposed to a magnet four times before being sold. Our fines are collected to make a compost product as well as a fraction in our topsoil and potting soil mixes. Our overs become mulch, and without all that extra fines weight, we’re able to sell a premium product.”

Metrosite uses their SM trommel screen for coloring too.

“The drum is perfect. For $5 in shrink wrap we coat the outside of the drum and run 2-3 thousand yards of mulch through it with a spray bar. It’s super efficient and gives us a very consistent product.”

Scott expects to purchase a second SM trommel when their recycling yard opens, and the ability to swap out drums is another reason why he sees the Doppstadt as the best machine for their need.

For someone who has accomplished more in less than a year than many in this business do in their first two or three years, Scott is far from complacent.

“This is just scratching the surface as far as I’m concerned,” he shares. “We set up a proof of concept and I think we have successfully demonstrated our model. I can see tremendous potential for scaling up and repeating this in other communities, and honestly, nobody else is really targeting these areas with the scope that we’re bringing.”

And if you pry a little further, you can get him to admit that his own kids are actually a huge inspiration and motivation behind his latest venture.

“When I first shared this idea with my kids [his son is 10 and his daughter is 17], you could see the excitement in their eyes. I guess communication tower work isn’t that exciting to the next generation!” Scott chuckles. “The aspect of giving back, and transforming something that would be considered throw-away into something that has real new value is appealing to them. Building a business that can leave a community in a better condition than we found it is something that I am quite proud of as well.”