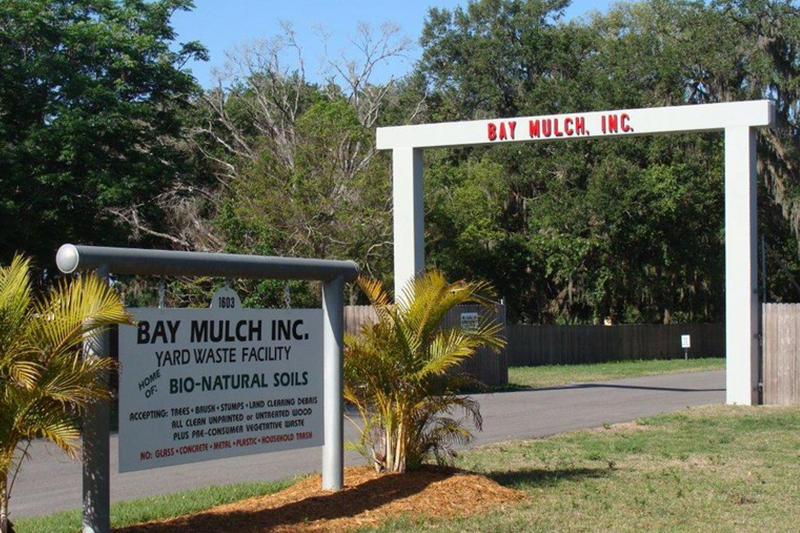 Sometimes a huge setback is actually a major opportunity in disguise. Doesn’t make it any easier to weather, but in hindsight the outcome is clearly more favorable than the original goal. Tom Kirkland went through such an experience nearly 20 years ago, and Bay Mulch is much better for it today. The Florida-based operation was started as a mobile cypress mulch producer, grinding in the field and bulk shipping to wholesale customers; but fate had a different path to success.

“I haven’t sold a bit of cypress yet!” joked Kirkland. “We had originally secured a contract to grind cypress which was supposed to last us more than 18 months; but by the time we finally got our machine, we had lost our contract and didn’t have a second one as backup.” With a machine and nothing to grind, Kirkland found himself in a bit of a pinch. “I had a history in construction, so I went after what I knew — land clearing and grinding for new construction.” At that time, in Florida, his change of direction paid off well. “Once we got started, we never looked back.”

For their first five years, Bay Mulch did still operate as a contract grinding operator, processing clean land-clearing logs and selling to mulch finishers around central Florida. But the need for equipment space, and the desire for a more steady and predictable cash flow led to the purchase of their first yard in 2001. “Having our own yard allowed us to bring in more material, and collect tipping fees from the marketplace. This not only helped provide a new source of revenue but also expanded our incoming material stream which helped us establish a broader mix of finished products,” explained Kirkland.

Permitted as a yard waste facility, Bay Mulch brought in green waste, limbs, and other similar organic scrap. “The larger material we could process as mulch. And we continued to do the mobile work too, but would bring the mulch produced in the field back into our yard to regrind and screen and color,” Kirkland continued. “We were really able to increase our production, and create a high-quality, colored mulch product which we sell in bulk.”

Mulch production continues to be the core business for Bay Mulch, but the increase in source material volume also produced a new opportunity. While the larger, higher quality material was perfect for mulch, the small limbs and general green waste, which does not serve as the best source material for mulch, was being turned into compost. At first, however, their process was not very deliberate. “Honestly, we used to just take our compostable material and windrow it in really big piles, turning every six months and let it go anaerobic.” While that would technically produce compost, the end product was not very predictable, and it often could take more than two years to create a pile of finished material. It satisfied the need, but it did not necessarily create a new opportunity.

That changed when Kirkland connected with Darren Midlane from Harvest Quest. Based in Longmont, Colorado, Harvest Quest produces a catalytic inoculant that dramatically increases the quality and cure rate of compost. By employing their HQ Catalyst—a vigorous community of enzyme-producing bacteria—and modifying their composting procedures to follow the Harvest Quest MSAP Method, Bay Mulch has recognized a dramatic turnaround in their compost results.

“It used to take us nearly two years to produce adequate compost,” Kirkland admitted. “Now we are creating a very high-quality nitrogen and nutrient-rich compost in about eight weeks!” With a bacteria count of more than 2,000,000,000 per gram, HQ Catalyst rapidly spreads throughout a compost windrow, enhancing the natural decomposition processes, while developing a sustainable culture of microorganisms that add to the value and performance of the compost as a plant and soil amendment.

“We worked with Darren to analyze our specific needs and discussed what the product could and couldn’t do and what the requirements would be to gain the maximum results. They helped us adapt their MSAP method to our wood waste material and fine tune the overall process.”

Bay Mulch was thrilled with the outcome, and their customers noticed immediately. “We’ve been able to double the price of our finished material and still sell it as fast as we can make it. Our customers rave about the product, and now we’re getting the organic growers in the area looking to arrange contracts with us to supply them with compost.”

Because of the precision with which the HQ Catalyst functions, Bay Mulch has been able to capitalize on the expanding opportunity to collect and compost food waste from area institutions as well. “Composting food waste presents a different set of challenges, and Harvest Quest has allowed us to mitigate those issues. We see this as a huge opportunity moving forward. There are so many avenues for collecting source material: breweries, coffee houses, grocery store chains, not to mention the post-consumer market. We have a lot more permitting to obtain but the potential is there for sure.”

For all Bay Mulch has overcome (they still haven’t sold any cypress mulch), Kirkland believes their biggest battle is still overcoming the negative preconceptions that compost can have in the Florida marketplace. “We try to emphasize our product as an enriched compost,” he explained. “Compost can still have a bad connotation in Florida. After the hurricane, all the green waste was just piled up and after a couple of years it was screen and called compost, but that’s not even near the same thing.”

So much of that low-grade decomposed material was sold as compost, that Bay Mulch still confronts an uphill battle when trying to overcome that expectation. But once they do get a customer to employ their product, the result more than speaks for itself. And the real challenge is producing enough compost product to satisfy the demand.