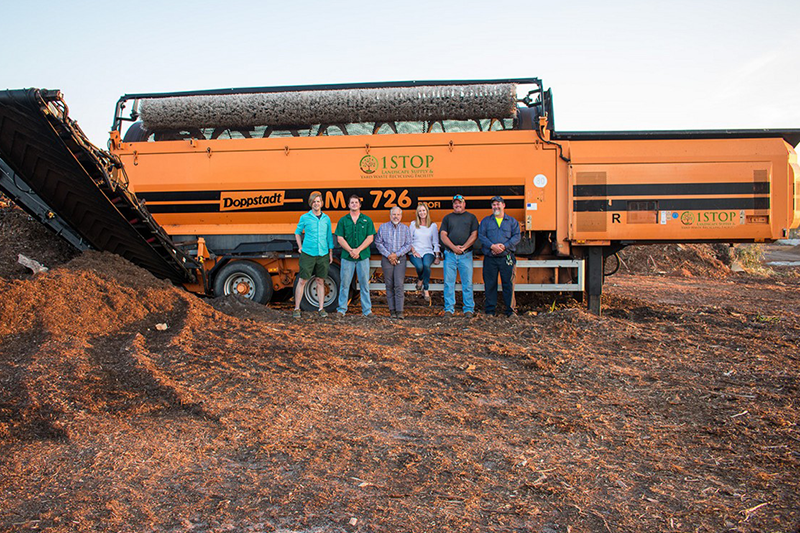 In the early 2000s, John Desrosiers recognized the need for a reliable organics recycling operation in the greater Tampa/Sarasota market in Florida. In their first few years, 1 Stop Landscape Supply would take in green waste and other organic materials and reprocess into useful mulch and soil amendments. Composting soon followed on a small scale at their 10-acre site. Today, 1 Stop now operates a 100-acre facility and has the equipment and expertise to recycle most any organic waste, and even reprocess concrete into a consistent 250 paver sand. Food waste recycling is next.

Since their inception, that equipment has been anchored by Doppstadt.

A Break From Conventional Equipment
“We got our first DW 3060SA shredder and SM 620 trommel in 2004,” recalls Desrosiers. “Back when the trend in equipment emphasized fuel-hungry high speeds [grinders], we broke away from convention and invested in a slow-speed shredder and trommel.”

Committing to the idea that accepting a slightly less fine product … 5-6″ minus versus 3″ minus … would result in enormous fuel cost savings, 1 Stop blazed a different path. Running a slow-speed shredder in tandem with the trommel screen allowed Desrosiers to still screen off all the fine mulch and amendments that the industry wanted. But he could also further process all the overs into myriad new products that 1 Stop became quite successful in marketing and selling. The outcome not only resulted in a lean, lower cost operation, but allowed 1 Stop to differentiate themselves with a broad range of uniquely positioned products. And they were hugely successful.

That success required the purchase of a second slow-speed shredder three years later. Of course, Desrosiers turned again to Doppstadt.

“Our second shredder was a DW 3060K, mostly the same machine but on tracks,” he explains. “We purchased the tracked machine with the intention of leveraging that mobility to expand our business into offsite contract work. But honestly, I don’t think it ever left the yard!”

Shredding … Concrete?
Continuing with his unconventional approach, Desrosiers deployed the DW 3060K mostly to processing concrete. Few (if any) would have even considered using a shredder to recycle concrete, but Desrosiers found it to be a nearly perfect solution.

“Why not? We saw an opportunity to do concrete, and I wasn’t about to spend upwards of $1 million on a dedicated concrete crusher when I already had this machine,” he continues. “We just idle that shredder and it churns out a rough 5″ minus product which we then screen through our trommel to produce a whole host of different material sizes. The concrete simply fractures, cracks and falls away. It works great.”

Surprisingly, the concrete has no negative impact on the machine.

“Quite the opposite!” interjects Desrosiers,. “We use smaller teeth on the comb; the trapezoidal teeth tend to be more aggressive. But we actually find that shredding wood is far more abrasive on the machine than concrete. You need to watch out for rebar, but the [automatic breakaway comb] accumulator on the Doppstadt is what makes this possible. Any resistance and the hopper just dumps and we move on.”

Recycling the Ground Under Their Feet
In 2016, literally bursting at the seams, 1 Stop relocated to a new 100-acre facility that has allowed them to operate far more efficiently and serve customers with a much higher level of dedication. The additional space has also enabled better material management and categorizing which opens up the potential for even more variety and differentiation.

One of those new materials came about from sheer luck.

“Our new location used to be a potato farm, and the entire site was covered with a rich topsoil, as much as three to four feet deep in some places,” shares Desrosiers. “We tested it and it came back with a nutrient pH of 5.9 which is just awesome for topsoil. So we stripped the whole site and have a tremendous stockpile of it.”

With it, 1 Stop has created a composted sand topsoil mixture, potting soil, and a range of custom blends for various industries. The added demand for blended soil products required Desrosiers to expand his equipment stable as well, and once again, he turned to Doppstadt.

“I still run that original SM 620 every day, but we just needed more capacity,” he says. “Our new SM 726 is 30% larger, 30% faster and just as efficient. What’s not to like? We’re now running two trommel stations all day, making six or seven products on a regular basis.”

The ease with which 1 Stop is able to generate such variety is also credited to the Doppstadt trommels.

“From start to finish, we can probably change our sizing drums in about 15 minutes,” Desrosiers continues. “That benefit is just phenomenal. We don’t have a set spot where we bring material to the trommel. Rather, we bring our trommel to the material, set up, select our sizing drum and just keep working.”

Jumping into the Food Waste Frenzy
For all their unconventional success, there is actually one new convention that 1 Stop is preparing to take on.

“We already have some relationships set up to bring in food waste and many more inquiries coming,” Desrosiers admits. “It is not something we’ve started yet because we promised ourselves we weren’t going to get into it until we had the infrastructure to do it the right way. Now that we have this new site, one of the last steps is to build a mixing slab to blend yard waste with the food waste.”

Florida is beginning to mandate food waste recycling, and the instant demand these new regulations will create is precisely what 1 Stop is preparing for. With their reputation and experience in composting and organics processing, they are perfectly positioned to become an instant leader in this market segment as well.